What Causes Frozen Pipes to Burst? 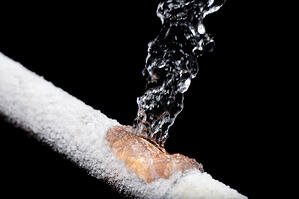 How do Pipes Burst?

Contrary to popular belief, pipes do not typically burst where the ice blockage is located. The expansion of the ice against the wall of the pipe does not cause it to break. Rather, after a complete ice blockage in a pipe occurs, the continued freezing and expansion inside the pipe causes water pressure to increase downstream, between the ice blockage and a closed faucet at the end. This increase in water pressure is what causes the pipe to fail. Usually the pipe bursts where little or no ice has formed. Upstream from the ice blockage the water can always flow back towards its source, so there is no pressure build-up to cause a break. Water has to freeze for ice blockages to occur. Pipes that are adequately insulated along their entire length are usually safe from freezing.

Which Pipes are Susceptible to Freezing?

Generally, homes and structures in northern climates are built with the water pipes located inside the building insulation, which protects the pipes from subfreezing weather. However, ex­tremely cold weather and holes in the building that allow a flow of cold air to come into contact with pipes can lead to freezing and bursting.

Pipes in attics, crawl spaces and outside walls are all vulnerable to freezing, especially if there are cracks or openings that allow cold, outside air to reach the pipes. Research has shown that “wind chill,” can accelerate the freezing process.

Holes in outside walls where television, cable, or phone lines enter can allow cold air to reach pipes. The size of pipes and their composition (e.g., copper or PVC) have some bearing on how fast ice forms, but they are relatively minor factors in pipe bursting compared with the absence of heat, pipe insulation and exposure to subfreezing air.

At What Temperature do Pipes Freeze?

When should you be alert to the danger of freezing pipes? That depends on the climate where you live, but the “temperature alert threshold” is 20 degrees F.

This threshold is based upon research conducted by the Building Research Council at the University of Illinois. Field tests of residential water systems subjected to winter tempera­tures demonstrated that, for un-insulated pipes installed in an unconditioned attic, the onset of freezing occurred when the outside temperature fell to 20 degrees F or below.

However, freezing incidents can occur when the tem­perature remains above 20 degrees F for an extended period of time. This is especially true if pipes are exposed to cold, flowing air, as on a windy day, due to cracks in an outside wall or lack of insulation. However, the 20 degrees F “temperature alert threshold” should be applicable in most cases.
0 Comments Click here to read/write comments