During dinner hours, a fire started in the vestibule of this popular Mexican restaurant. The sprinkler system managed to extinguish the fire, but not before it spread to the deck and burned through the roof of the vestibule, thus causing extensive smoke and water damage throughout the restaurant.

Based on previous knowledge of our restaurant construction expertise, the manager of Don Pablo’s contacted Wolgast for assistance. The Wolgast mitigation team quickly arrived on site to assess the damage.

After completing the damage assessment, Wolgast secured the building and tarped the roof to prevent further damage to the interior.

The initial phase of the restoration process included board up; water extraction; demolition; content recovery; pack out; and cleaning.

To be sure the job was done to our clients satisfaction, Wolgast leveraged our restaurant construction knowledge to act as their advocate to negotiate the scope of the work with the insurance agent.

Due to the complexity of this project, Wolgast placed a full-time superintendant to oversee every aspect of the rebuild. The new restaurant design required our special skills in custom, finish carpentry to get the look just right.

To minimize business interruption, Wolgast provided our client with an on-site trailer to act as a temporary office during reconstruction.

Wolgast set an aggressive schedule for this project and came in on time and on budget. Don Pablo’s restaurant now has a new, more contemporary atmosphere that enhances the dining experience and delights their guests. 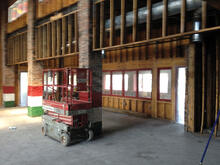