During spring break, when the building was vacant, an automatic sensor on a bathroom urinal malfunctioned. The water flowed for 1-2 days, through the walls, down a stairwell and into classrooms. The mitigation had to be completed before the students returned from spring break.

Since Wolgast was already in negotiations to perform renovations for the school, they contacted us immediately. We got the call on April 8th, and as per their request, our mitigation team arrived the next day. We agreed to have the school operational for classes resuming April 14th.

During mitigation, we closed off one quarter of the school. We worked with the staff and faculty to move everything out of the classrooms. We coordinated the setup and packing out of the affected classrooms.

Due to the complexity of this project and the tight deadline, a Wolgast Construction Management Superintendant was assigned to the job as a working foreman. We initially agreed that all but two rooms would be opened when the students returned. Reconstruction in the remaining two rooms was done from 3:00pm to 11:00pm to prevent interruptions to the school proceedings.

We utilized a large work crew, comprised of employees from both our restoration and general contracting divisions, to ensure proper procedures were followed and work was completed in the stages and time lines that were established.

The school was out of service for only five days during the spring break period and classes resumed on schedule with no interruptions. All mitigation was completed on April 21st, as we were working on a few areas independent of the main rooms. Repairs started with a verbal approval on “scope of work” from the adjuster assigned to the claim.

Reconstruction began on April 24th, with a target completion date of July 3rd. New carpet and cabinets were installed when school was dismissed for summer recess. We utilized one of the teachers’ husbands and his cabinet company as the vendor/contractor for the cabinet installation. We provided an opportunity to save money by value engineering the replacement of the multi-layered floor system.

The project was completed on schedule for the opening of the school, and as scheduled for the repairs. 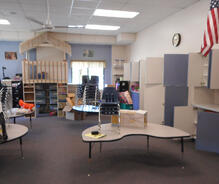 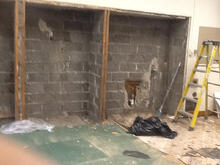