This 4,300 square foot centennial farm house was struck by lightning during one of the heaviest rain storms of 2014. The lightning started a fire in a 2nd story bedroom that quickly spread into the entire roof system. Three quarters of the home suffered water damage from the prevailing rain storm and consequential flooding from the massive amounts of water required to extinguish the fire.

At the recommendation of a local HVAC contractor, the home owner called Wolgast Restoration to provide an estimate for water mitigation and reconstruction services.

Our project manager met with the insurance adjuster and home owner and secured an emergency work authorization. Within a few hours, our crew had the entire roof system tarped off and the home boarded up to protect against further water damage from the storm.

Our water mitigation and content recovery teams arrived early the next morning to assess the damage and implement the mitigation plan. Affected areas of the home were identified and contained. A drying envelope was created and air dryers were used to remove the moisture. The contents were evaluated, photographed, cataloged, and packed out within a few days. Once the contents were removed from the home, we immediately began demolition and mold remediation of the affected structure.

Due to the age of the home, the balloon framing, and multiple floor and ceiling levels presented a unique demolition and reconstruction challenge. Due to the severity of the fire, the entire roof structure had to be demolished and re-built with an engineered roof truss system. To the home owners delight, this allowed us to extend the second story, five foot knee walls to a full eight foot wall system, providing more usable living space.

Every room in this home but one was affected by the fire or subsequent water damage. Our Fast Track process allowed us to complete the project in three and a half months. Our experienced reconstruction team was able to update the structure using modern construction techniques, while still maintaining the historical integrity and appearance of the home. We came in on schedule and on budget, and the customer was pleased with our quality workmanship and the exceptional care we took in restoring their home and belongings. 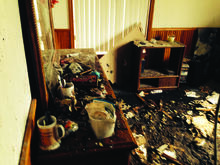 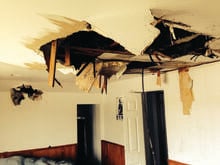